Night of the Bear

All caregivers in ICU are given a pager so the doctors/nurses can get in touch quickly, usually to provide status during surgery, etc. So as you can imagine, if the pager goes off unexpectedly in the middle of the night and when your son isn't in surgery, parents can get a bit worried. Well, it was a bit after midnight when our pager went off last night. Standard protocol is to call the ICU front desk to find out what's going on . . . need to meet the surgeon in the conference room, should go to Eddie's room, etc. . . . so imagine our heightened anxiety when no one was answering the phone at the front desk. By now, we're imagining all kinds of crazy scenarios so we got dressed and went downstairs, looking like people do when woken up in the middle of the night!

We were met in Eddie's room by 7-8 doctors and nurses with all of the lights blazing . . . obviously not normal. Eddie was on the bed and he seemed to be breathing ok and no one was working on him, so a bit of head scratching on our part. Finally, one of the nurses broke the news . . . "Eddie decided it was about time for his breathing tube to come out." Yes, Eddie managed to pull a fast one on his night nurse and, when she wasn't looking, pull out his breathing tube entirely. And as you can see from the picture below, we're talking about 24cm of breathing tube (9-10 inches). 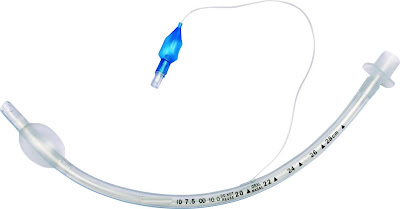 Apparently he had a good cough and the nurse was going to help him clear his lungs, but Eddie managed to get his hands on the tube and gave it a good yank. Most importantly, he is ok . . . probably suffering from a pretty sore throat both from two weeks on a breathing tube and from pulling it out so abruptly. The nurses attached a temporary breathing tube in his nose and the plan is to watch how he does over the next few hours. If he does well, they won't replace the ET and will let him start to recover on his own.

So in addition to that excitement, we also welcomed a couple new furry friends to our growing arsenal of stuffed animals. First, the Berlin Heart company (yes, the company that makes the Berlin Heart . . . ah, you Germans are so creative!) sends a stuffed bear to all of its patients. 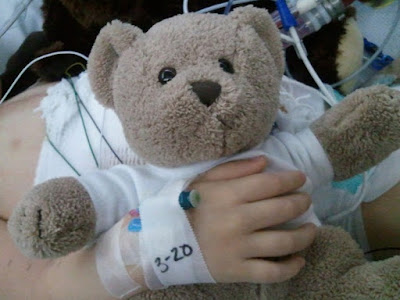 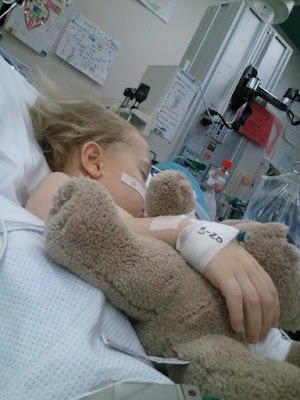 And then we were met at the front desk with this surprise! Again, I'm not naming names, but the guilty parties know who they are. Wow! If you're creative, there are some fun things to do at the hospital . . . we've added another to our list . . . walking through the corridors carrying a 3 foot tall stuffed bear. Impossible for the many patients, their families, and even the doctors not to smile when they see Sarah walking down the hall with this bad boy. Thank you! 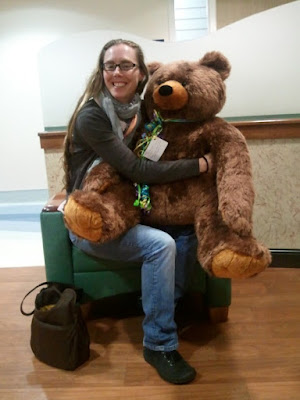 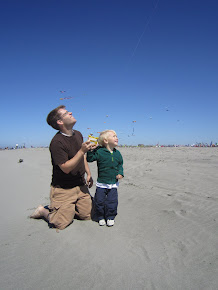 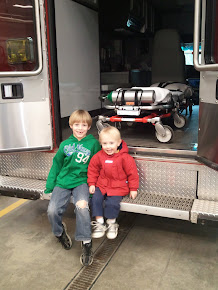 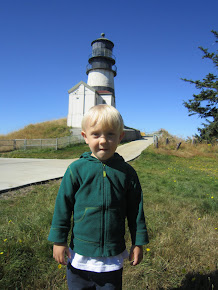